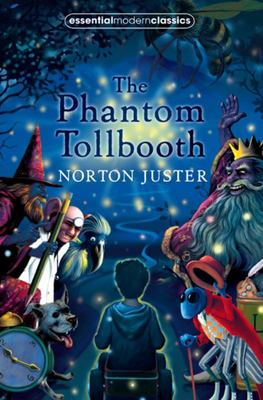 With almost 4 million copies sold over 50 years after its original publication, generations of readers have now journeyed with Milo to the Lands Beyond in this beloved classic that Philip Pullman says "comes up bright and new every time I read it . . . it will continue to charm and delight for a very long time yet. And teach us some wisdom, too." Enriched by Jules Feiffer's splendid illustrations, the wit, wisdom, and wordplay of Norton Juster's offbeat fantasy are as beguiling as ever.   For Milo, everything's a bore. When a tollbooth mysteriously appears in his room, he drives through only because he's got nothing better to do. But on the other side, things seem different. Milo visits the Island of Conclusions (you get there by jumping), learns about time from a ticking watchdog named Tock, and even embarks on a quest to rescue Rhyme and Reason. Somewhere along the way, Milo realizes something astonishing. Life is far from dull. In fact, it's exciting beyond his wildest dreams!

'Think Alice in Wonderland for the modern age. Brilliant'. The Guardian 'The most unpredictable, the most stimulating children's book I have read for a very long time. Words, numbers, cliches, proverbs are taken literally, imaginatively or punningly in an enthralling and very funny dazzle of mental fireworks.' The Sunday Times 'An altogether remarkable book, one that should delight any bright child, and that will be no burden for a parent to read aloud. Related with unflagging wit and a marvellous sense of the fun to be had with words, this book will be enjoyed by children for years to come.' Spectator

Norton Juster was born in New York State in 1929, just prior to the Great Depression of 1929. There are still a number of people who attribute that catastrophic event directly to his birth. He grew up (carefully) in Brooklyn, studied architecture at the University of Pennsylvania, and spent a year in Liverpool on a Fulbright Scholarship, doing graduate work in urban planning and learning to ride a motorcycle. After spending three years in the US Navy, he practised architecture in New York and Massachusetts before teaching architecture and planning. He began writing seriously while in the Navy. His work includes The Dot and the Line, which was made into an animated film, and a musical adaptation of The Phantom Tollbooth. Between the teaching, architecture and writing his life can sometimes get quite hectic. of the three things he does, Mr Juster enjoys most the two he is not doing at any given time. He is married and lives in Massachusetts. He has one daughter and one granddaughter. The Phantom Tollbooth, his most famous book, won the George C. Stone Center for Children's Books Award.